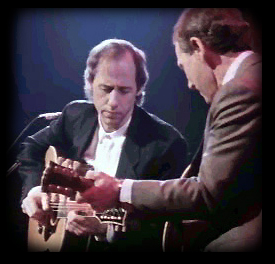 Official recordings made during these years

Additional information: Liz Whatley wrote in the November 1983 D.S.I.S. newsletter:
On Tuesday night, Paul Brady (one of our other artists) played a gig at Dingwalls in London, and Mark got up and played about six songs with him, much to the surprise and delight of the crowd. I think Mark found it a nice change to play in a small club for a change!
Which Tuesday it exactly was in November is still unclear to me. 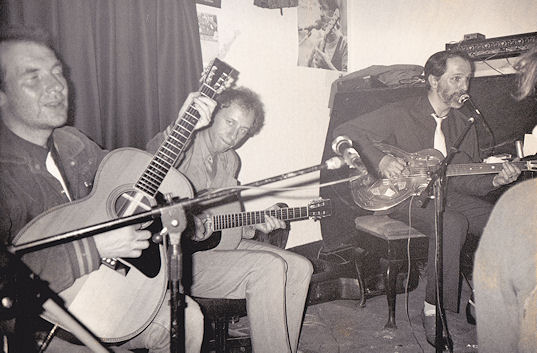 Mark Knopfler and Steve Phillips play a gig at The Fenton, Leeds. They get paid £40 in total, £20 each. 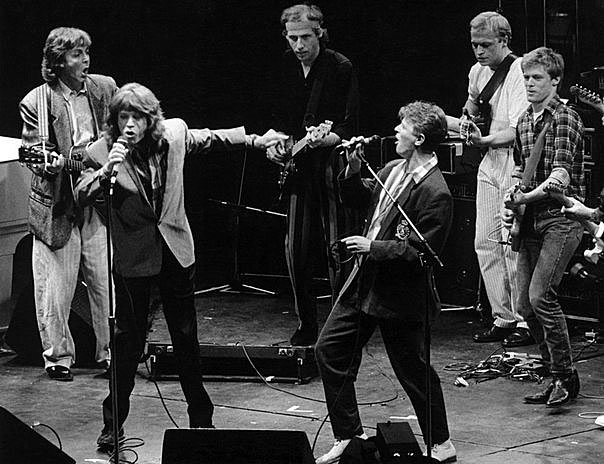 Before the show in the presense of Prince Charles and Princess Diana: 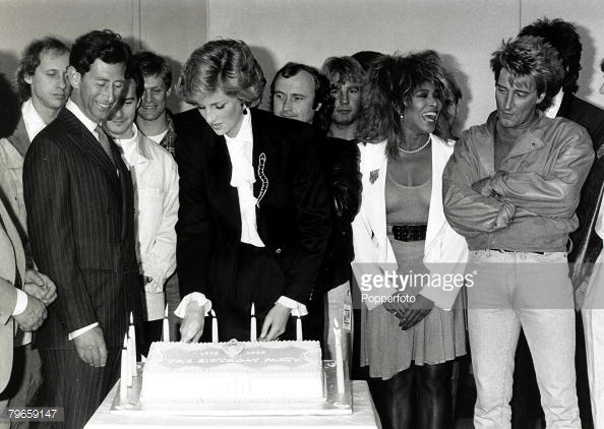 The picture below is most likely taken during the rehearsals for the concert in Nashville: 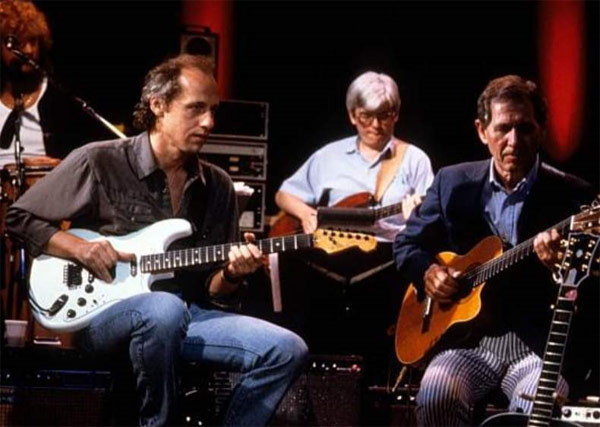 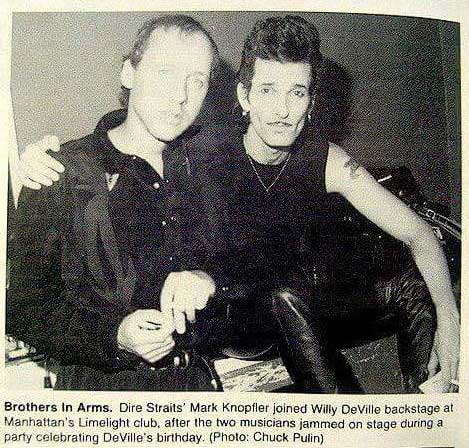 Willy Deville's birthday was on 25th August, so the above mentioned birthday party most likely took place around that date.
Mark and Willy recorded the album Miracle together which was released on 31st October 1987.

xx.02.1988    Le Papillon Corbridge UK
Additional information: Liz Whatley wrote in the March 1988 D.S.I.S. newsletter:
Mark and Brendan met up with Guy and Alan, and they all played at a small restaurant called "Le Papillon" in Corbridge (between Hexham and Newcastle). The restaurant owner is a friend of Mark and Alan. Mark then spent the next few days at Gleneagles in Scotland, taking part in a charity clay-pigeon shoot for racing-driver Jackie Stewart's JPS Team. Apparently he was surprisingly good for a beginner... The preceding text made it clear that the performance took place in February, but it was unclear which day it exactly was. 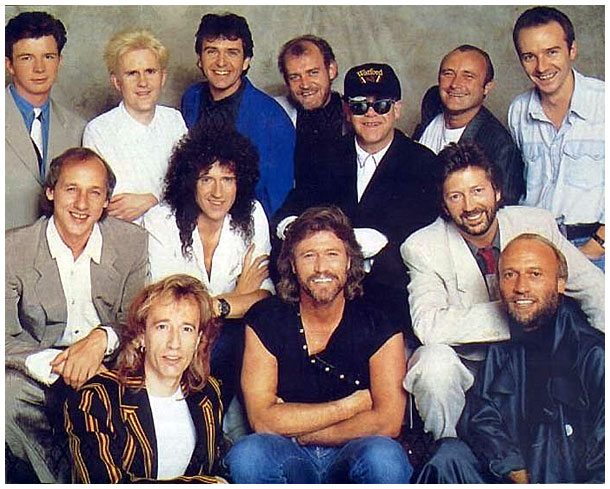 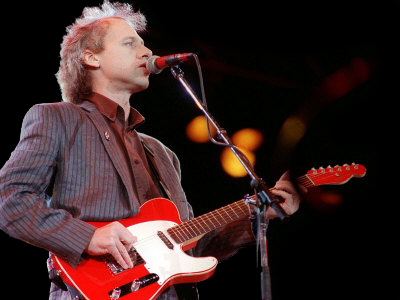 Pictures taken the warmup gigs (left picture is of the first show), the picture taken during Walk of life is from the second show: 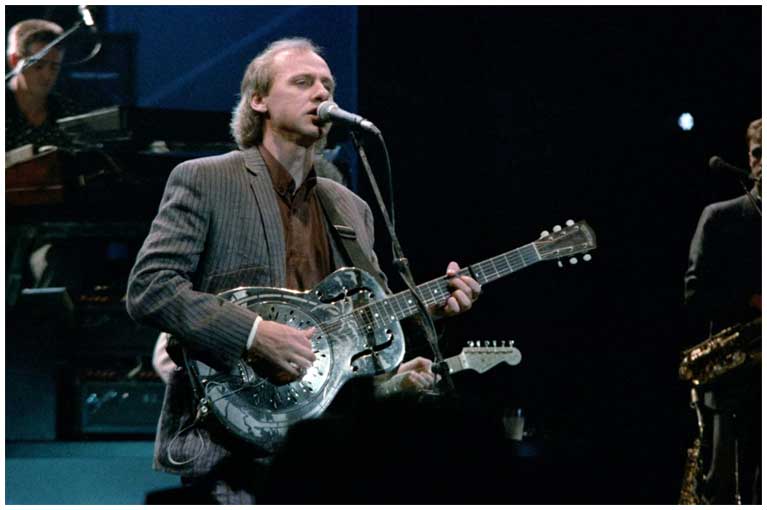 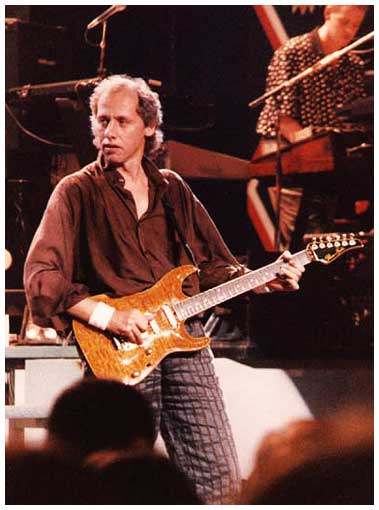 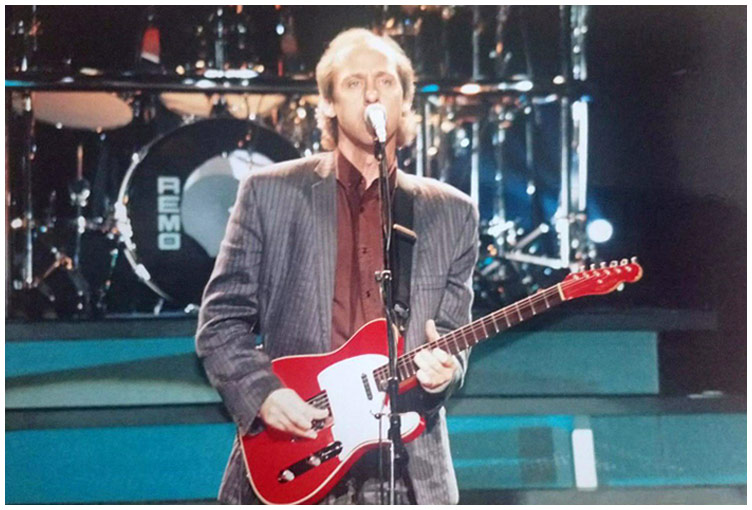 To be fully prepaired for both the Prince's Trust concerts and the Nelson Mandela warmup shows & main show, Dire Straits and Eric Clapton rehearsed at Brixton Academy on 30th and 31st May and 1st, 2nd, 3rd and 7th June 1988.
The picture below is most likely from one of these dates: Mark is wearing the same striped jacket, but different trousers. 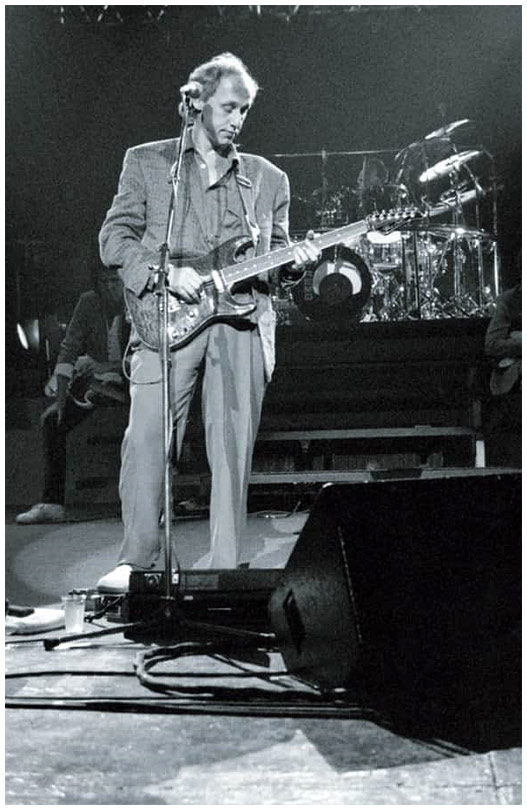 Click here for a picture before the show featuring Harry Belafonte, Whitney Houston and Mark Knopfler.

Additional information: this was a concert from Brendan Croker and 'The 5 O'Clock Shadows with Mark Knopfler and Alan Clark as a special guests. Mark Knopfler's appearance was supposed to be a secret but it wasn't a very well kept one. A cue of about half a mile snaked it's way across Pontefract Park more than an hour before the doors opened. Below a few pictures from that special performance: 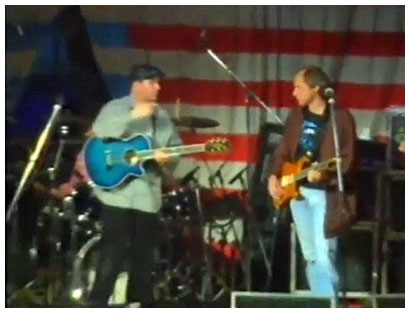 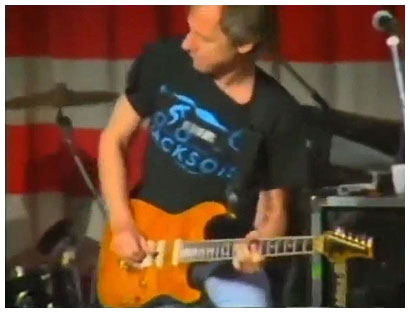 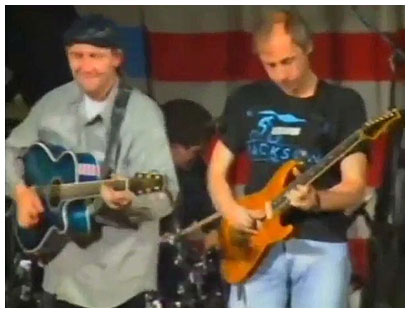 Additional information: this was a special performance to raise money for The Lung Foundation charity. It was called the Red Balloon Ball held in the The Dinosaur Room at The Natural History Museum, Kensington, London, UK. Other artists besides Mark Knopfler were David Gilmour, Gary Brooker, Sam Brown, Gary Moore and Chris Rea.

Additional information: this was a one-off charity concert by Dire Straits, May 1989, exact day unknown. It was a private "invited-guests only show" and the tickets were 125 UK Pounds each! It was done to raise money for the Life Education charity, which helps prevent drug abuse among young kids, and of which John Illsley is a committee member. The evening raised 40,000 UK Pounds! A nice mostly up-tempo set featuring Sultans of swing, Two young lovers, Walk of life, Romeo and Juliet, a calypso version of So far away, Money for nothing, a cover-version of Chuck Berry's hit Nadine and Twisting by the pool.

Additional information: this was a concert from Brendan Croker and 'The 5 O'Clock Shadows with Mark Knopfler and Eric Clapton as special guests. A few tracks from that performance ended up on a single called EP 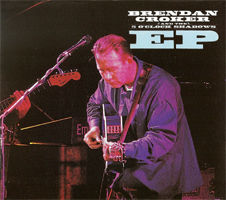 Additional info: Mark Knopfler lead his supergroup Dire Straits infront of just 700 people at the Mayfair Ballroom, Newcastle. The gala dinner concert was in support of North East Personality of the Year, Joanne Gillespie, 11 years old, who wrote the book 'Brave Heart' about her fight against cancer. The charity raised more than £45,000. Sadly, Joanne died in 1993. The pictures below show Mark playing at the show and Joanne Gillespie (with tongue out) and her sister Sarah together with Dire Straits. Remarkable is that Jack Sonni did not perform with Dire Straits anymore after the Brothers in arms tour, for this show he was replaced by Brendan Croker. Click here for a press release by Immediate. 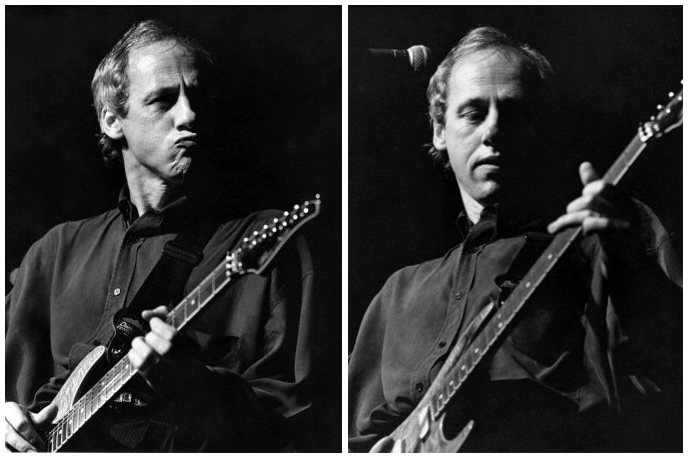 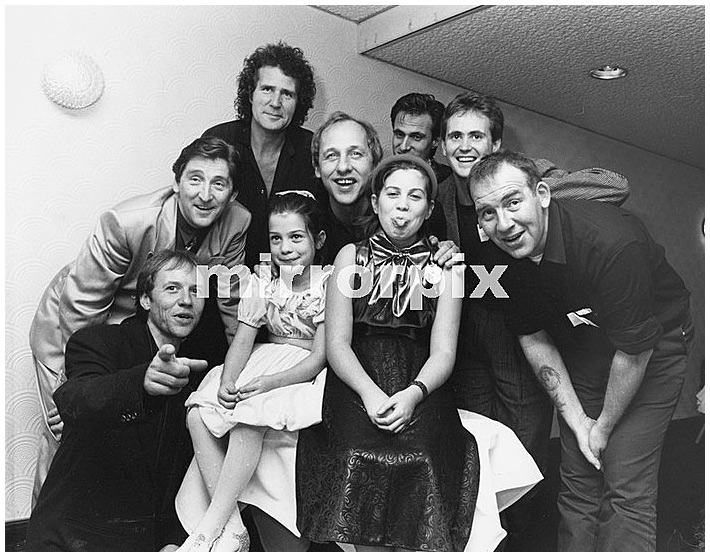 The official website from Brave Hearts of the North East mentions: 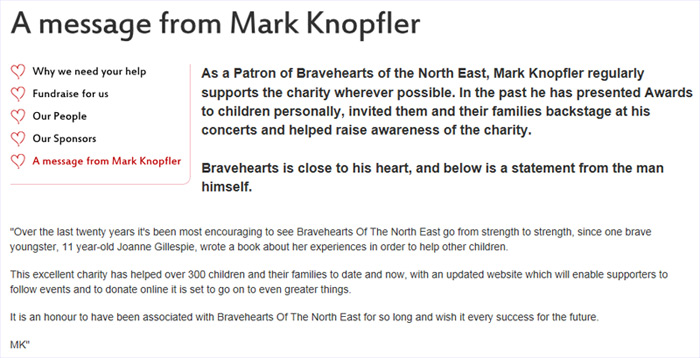 Roger Scott (23rd October 1943 - 31st October 1989) was a respected British radio disc jockey. He was best known for presenting an afternoon radio show on London's Capital Radio from 1973 until 1988. In June 1988, after fifteen years with Capital, he moved to commercial-free BBC Radio 1. There, he reached a national audience for the first time, presenting a Saturday afternoon show and a late night Sunday show. The Saturday show featured interviews with many artists, including Mark Knopfler. The Sunday shows were featuring 1950's rock'n'roll, soul, classic rock and more contemporary music. Roger Scott's last show was on Sunday 8th October 1989 and he sadly passed away on 31st of that month aged only 46, after a brief battle with cancer. A tribute programme about Roger's life on the air was broadcast by Radio 1 on 4th November 1989, entitled 'Radio, Radio', recorded just a few weeks before his death. On 7th December 1989, various artists gathered to pay a tribute to Roger at the Abbey Road Studios, London, UK. Mark Knopfler and Guy Fletcher are present to play a live version of Feel like going home with Mark on vocals. Mark has a pretty emotional speech, talking about making The Notting Hillbillies album and specially the last song Feel like going home. This song has a very special meaning because Mark wanted Roger to have a listen to it, but sadly passed away before the track was finished and recorded. 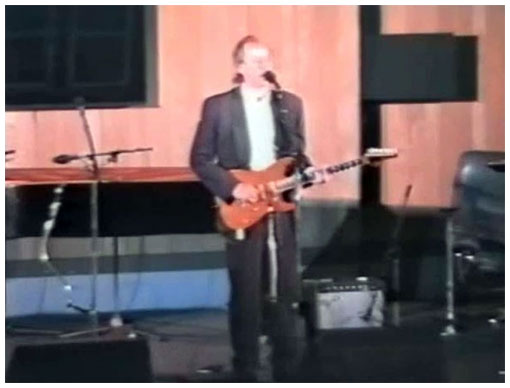 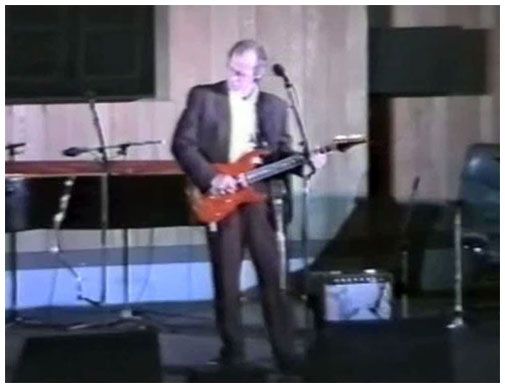 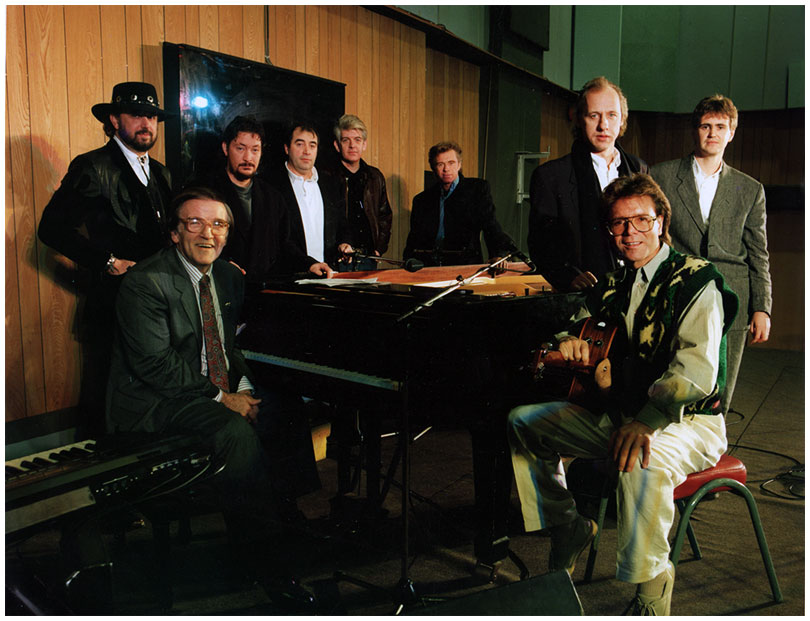 And here an earlier picture of Mark Knopfler, Roger Scott and Randy Newman: 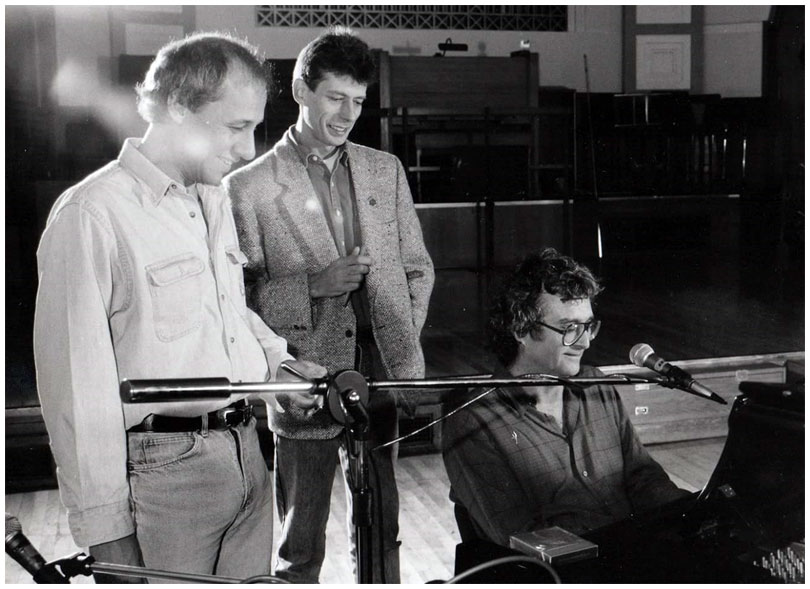 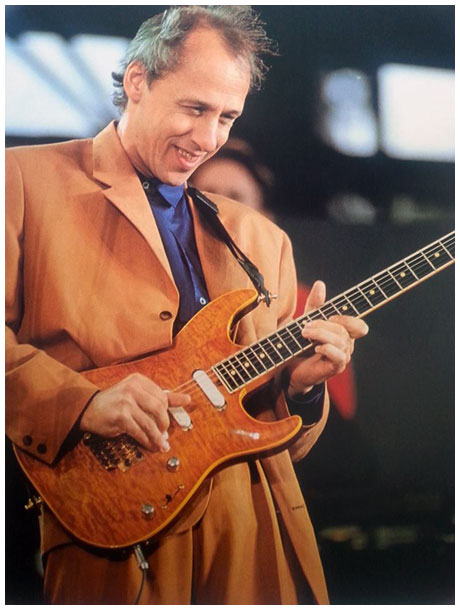 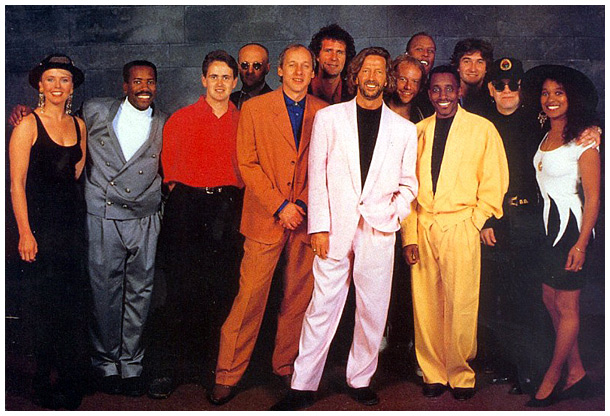 Additional info: this was a charity concert in aid of the Nordoff-Robbis Music Theraphy Centre for providing music theraphy for handicapped children and the BRIT School for Performing Arts and Technology. For this historic event gathered 120.000 fans at Knebworth park. Mark Knopfler played three of his own songs with Eric Clapton's band with the addition of Guy Fletcher, Alan Clark and John Illsley: Solid rock, I think I love you too much and Money for nothing. Mark  also played on a few tracks for Eric Clapton and Elton John: Pretending, Before you accuse me, Old love, Tearing us apart, Sarifice, Sad songs, Saturday night's all right (for fighting) and Sunshine of your love.

Somewhere in 1991, Mark Knopfler played guitar on Jeff Sadler's wedding. The pictures below are taken from the official Lindisfarne website. 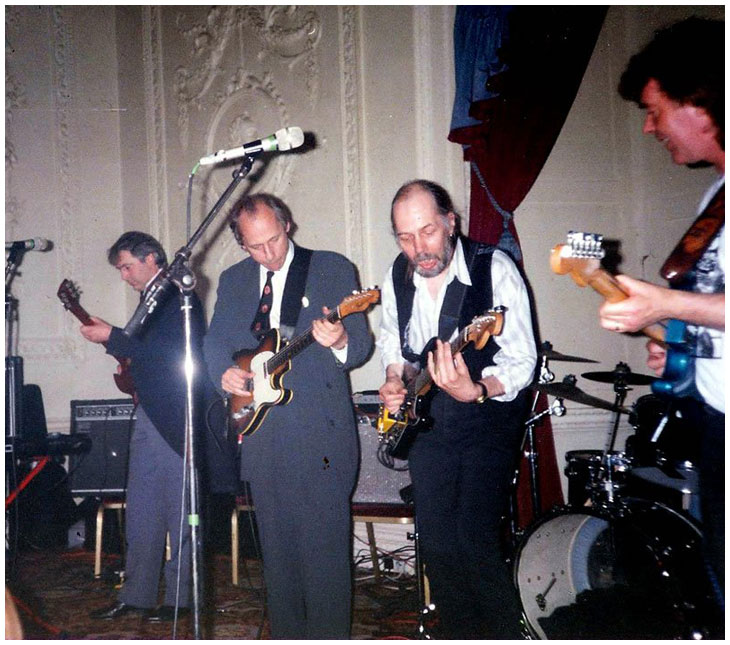 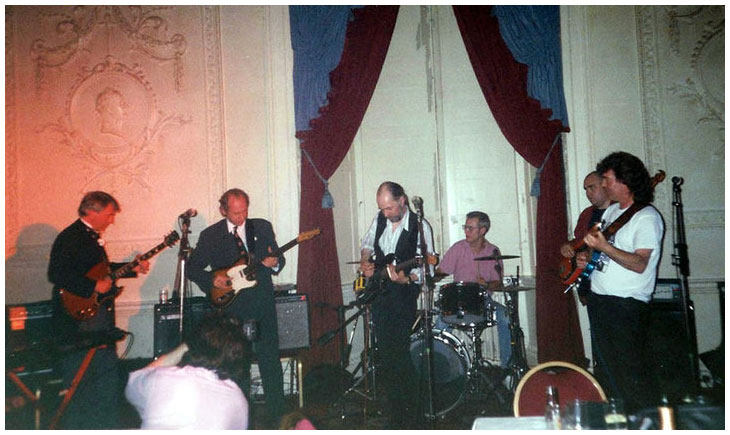 Sadly, nobody had a tape running, so these pictures are the only evidence of this special performance.